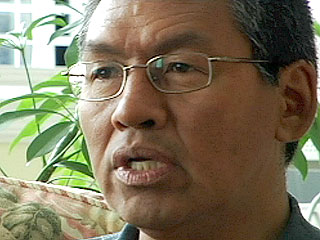 Jobie Weetaluktuk is a writer, editor, broadcaster and filmmaker who originally hails from Inukjuak, Quebec, and is now based in Montreal. His first documentary film, Urban Inuk (Igloolik Isuma Productions, 2005), follows the spiritual and practical struggles of three Inuit who have left their ancestral homeland in the Arctic for the concrete jungle of Montreal. Urban Inuk aired on Aboriginal People’s Television Network in 2005 and played in over 20 festivals and venues across Canada, the USA and Europe. In 2006 the documentary won the Grand Prix, Rigoberta Menchu Community Award at the Land-inSights First People’s Festival in Montreal, and toured various Maisons de la Culture in that city as part of the Rencontres internationales du documentaire de Montreal (RIDM)’s Coups de Coeur programming.

“I was born in a traditional camp, but grew up in Inukjuak.

For Qallunajatut (Urban Inuk), I wanted to make a film about Inuit in the city. There was a gradual change; we were nomads in camps. Nowadays, we live in permanent villages, and many of us live in the big city. The film follows three characters. The first, Jayson, was doing well, but during filming, he had just broken up with his girlfriend and found himself in the streets. The second, the late Charlie Adams, did not want to go to live in Montreal at first. He had to go south for medical reasons and living in the city was a very difficult experience for him. As for Pitsulata, she had been living in the city for quite some time and found her way: everything was going well for her. She is a social worker and helps others with the problems they face.

And the underlying problem is the loss of identity. If you don’t have a strong sense of who you are, you’ll feel completely lost in the city. And even up North, many people who have lost their bearings have problems with the concept of Inuit identity. So the critical point is not where you are. I live in Montreal, but have no problem affirming my Inuit identity, especially since I speak the language fluently (although I think you can be Inuit without knowing the language).

The idea for my other film, Umiaq Skin Boat, came when I learnt that a group of people in my community had decided to build a traditional sea mammal skin craft: an umiaq. I thought it was interesting because no umiaq had been built in this region for at least fifty years. I know many stories revolving around the umiaq.

My next film will speak about residential schools. It will be a film about change and will explore the idea of transition. I came from a traditional camp and to go to school, I had to go to Inukjuak.

In Ottawa, I studied radio and journalism: this was my first profession. Later, I moved on to print media: I published a magazine. After that, I worked in television for several years at IBC (Inuit Broadcasting Corporation) in Iqualuit. That is where I got the opportunity to do what I had been wanting to do for several years: make a film. Thanks to the Igloolik Isuma production company, I was able to carry out my Urban Inuk project.

Radio, TV and video are all means of expression well adapted to Inuit, who are people from an oral tradition. They are excellent tools to help us successfully go through the transition period we are experiencing nowadays, while encouraging us to safeguard our language and our culture.

I’m not ruling out the idea of making a fiction film one day, but haven’t got there yet.”

Excerpts from the film Umiaq Skin Boat from Jobie Weetaluktuk

A motor boat is advancing in the water. From the inside of the boat, we see the back of three passengers in Nordic garments. Then we see the coastline, a typical Nordic summer landscape: rocks without trees. Finally, we see a village with prefabricated houses. The voice over, in Inuktituk, tells us that “ a group of elders has decided to build an Umiaq, the first in over 50 years. We close-up to hands using see tools: an electric drill and a wood cutter. A larger shot shows us the structure of a hull witgh Inuit working on it. “The Pukkik group is making the Umiaq something our ancestors used to haunt marine mammals in open water”

We see again the hull and the workers and a vintage photography of Inuit hunters with their harpoons.