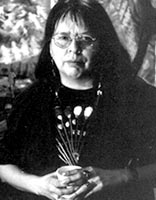 The strongly underscored materiality of Glenna Matoush’s recent paintings places us before a paradoxical universe inhabited by shamans’ souls and haunted by the trickster’s spirits. If the work seeks to take flight, it is above all anchored; roots plunged deeply into Ojibway tradition. Born in Rama, Ontario, Glenna Matoush lived for many years in Mistissini, sharing in the Crees’ passion for their vast lands and resources. Her paintings often plot out a kind of cartography measuring both the distances between places and the path these souls must travel to achieve peace.

The workshop as a trembling tent

Large windows look out onto a noisy Montreal street. We are squarely in the city’s heart; our gaze crosses a huge screen that is always lit. And yet this place is supercharged with an uncommon creativity. Canvases, densely filled with materials that seem astonishing to the urban eye (animal hairs, bones, bark, beads, pine needles and porcupine quills) fill the walls and tables. The territory is convened and the spirit of the ancients, invoked a thousand times, shows itself.
Matoush’s paintings are inscribed in her people’s memory. They appear as signs, prosaically carrying out the sign’s purpose of showing the way. Strange canoes, borrowed from cave paintings discovered in Ontario, cross the fiery skies in these paintings. Certain archaeologists sought evidence of the Viking presence in the Great Lakes in these pictograms, but this denied the First Nations’ own spirituality and the reality of their historical occupation of the territory. For Matoush, painting these Shamans’ canoes as they transport souls is first and foremost a gesture of affirmation, a matter of urgency and dignity, in the face of the heavy veils of ignorance in which we too often shelter our fragile certainties. As the series develops, the signs gain purity, and become symbols of a sacred universe where compassionate beings open the path to healing.

Matoush has always shown concern for others. A 1994-95 painting shows us a dormitory in one of those sinister places where they undertook to destroy the vital links connecting young Indians to their cultural heritage. The image is as raw as a cry of pain but the artist’s craft in the canvas is an example of hope.
More recently, in September 2003, as part of the Living Monument project, she took part in the creation of a mural in memory of the 63 women sex workers who have been murdered in Vancouver since 1978. Many of these women were of Aboriginal origin. On a wall of St-Laurent Street in Montreal, the Shamanic rafts soar over a city beleaguered by evil and distress. Two of the major components of Glenna Matoush’s artwork, her revolt against the lot set aside for her people and the compassion that acts as a balm against suffering, take pride of place.

Flashes of beauty in the night

The recent paintings are articulated around the very sign engraved by the ancient ones, photocopied and glued onto black surfaces. The form of the Shamanic canoes can barely be recognized. The painter’s strokes no longer seem to obey any logic. Our gaze is sucked up by the opacity of blackness, our usual guideposts disappear and suddenly we breath calmly once again. Life is restored to us and if we remain attentive to these works for a few instants more, we can hear Glenna Matoush’s sonorous laughter. The artist has blazed a trail upland and leaves us the choice to take it or not. She has eluded the traps. Both the trap of art as a panacea and the trap of despair as an alibi. 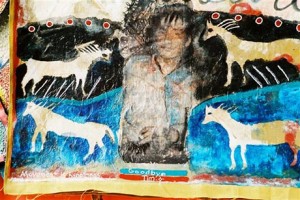 Four horses in front of a tepee. The largest is covered with symbols: open hands, thunderbird, Shamanic figure, thunderbolt and suns. 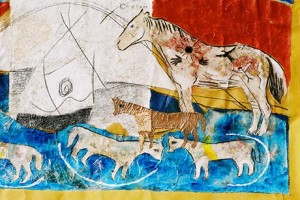 The first page of this artist’s book is a sketch drawn by one of Glenna’s friends before he fell ill. Four horses surround the portrait of a young man with a sad expression. The inscription ‘Goodbye Tim’ can also be read. Glenna reproduced the sketch in this artist’s book, dedicated to Tim Diamond, a young Cree who died in 2004 from complications of AIDS. 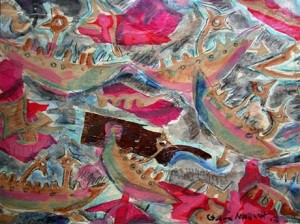 Variations on the theme of the shaman’s boat. Several boats in motion. 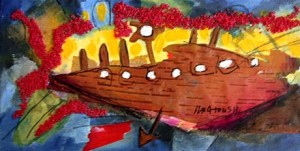 Stylized depiction of a boat whose main effigy is at its centre, the figure of a shaman carrying souls to the great beyond. Inspired by a petroglyph discovered in Ontario.