Maria Hupfield’s two works seem to ask the question of identity from opposite perspectives. With Made in Kanata, she takes an ironic look at the clichés that consign everything relating to First Nations to a few artefacts or practices studied and classified according to a taxonomy that remains entirely foreign to their own worldview. Neatly strung along a clothesline, the figurines made from painted clothespins and their medicine bag recall the constant need to readjust our outlooks: everyday life as a supreme remedy to misleading mythologies.
As for Spirit Catchers, which plays on several levels of interpretation, each of its thirteen elements can be seen as a brilliant synthesis of the wrenching and mending process involved in any search for identity. Each image solves the dilemma of an actual being. The entire work is a reflection on the Indigenous experience. Each of the faces photographed head-on, without artifice, is covered in an acetate film printed with the depiction of a traditional garment: the pieces are adorned with embroidery, braidings or ribbons and fringes. Far from a demonstration of the weight of tradition, the paradoxical result strikes a balance between lightness and grave seriousness, humour and tenderness and between play and responsibility. The work’s extreme fragility is at once its strength, originality and poetry. 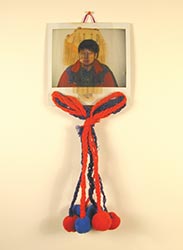