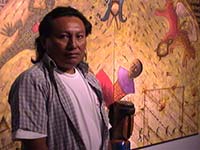 Born on July 10th, 1964 on Utupu Island, Kuna Yala in Panama, Oswaldo De Leon Kantule has painted since 1980. Early in the 1990s, he began to show his works in Boston, Washington and Panama City, and finally in Montreal, where he lives and works, in 2003.

He is developing a protean work in which painting, drawing, engraving, sculpture, installation and performance come together on the threshold of a dreamland peopled by spiritual beings, fantastic animals and birds. Oswaldo De Leon Kantule has become a regular at the First Peoples’ Festival. 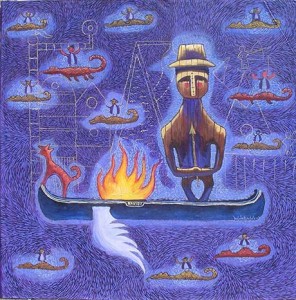 Nana Gapsus is the Kuna name for Mother Night. When Grandfather sun (Ibe) hides, this mother rocks us so that we may rest, so that we may begin another day. Also, under the cover of Mother Night, evil spirits come and the Nuchu (a carved wooden man-like figure) protects us. The travel refers to our dreams, when we sleep. 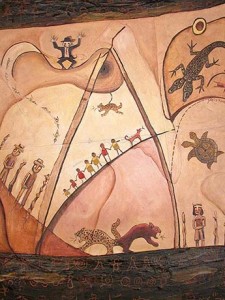 Boa chu galu (In the Spirit-Home of Bo Achu)

This painting represents the spirits of some children caught in the Spirit-Home of Bo Achu, (mythological feline creatures), here ever vigilant so as not to let anyone inside who can help them. Outside are Nuchus trying to rescue the children. Further up in the spirit-home is an evil spirit who is attacking the rescuers with bees. There is a two-headed crocodile in the other dimension, carrying away the spirit of another child. The two-headed turtle appears as a symbol of life and of great power. At the top and bottom appear pictographs to help save these trapped creatures. 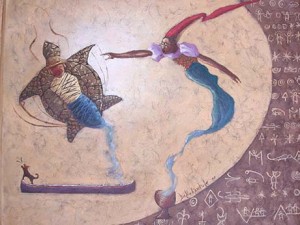 This painting represents a historical myth of the Kunas about how a man was taken away to the deeps of the ocean by a mythical turtle woman when he went to hunt turtles with his wife at night at the beach. The turtle was covered with a sticky substance and when he touched it, he stuck to her shell and was taken away. 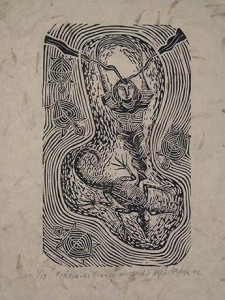 Abyss, chaos, tornado, whirlpool, fountain-source of water which may be located in rivers and oceans and in the various layers of Mother Earth, inhabited by evil spirits such as large crocodiles and fish. 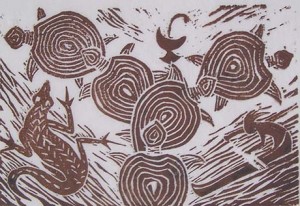 Sea turtles are symbols of fertility, long life and eroticism. In Kuna mythology, they represent women and are the most beautiful creatures in the marine world.