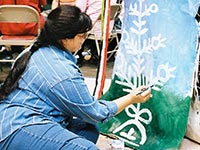 Pauline Lahache lives and works in Kahnawake. She is an artist with a deep commitment to passing along Mohawk values and culture, and has taught at Kahnawake Survival School for around twenty years. Her artistic outlook is strongly coloured by her attachment to the traditions and teachings of the Ancient ones. Her work passes their knowledge down, with sincerity and vigour that have only grown stronger over the years. For her own community and for us all, Pauline Lahache is a person playing an essential role in developing and protecting a living culture that believes in its own future. 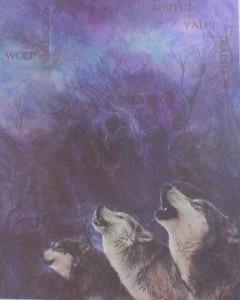 Group of three wolves howling at the moon at night in a forest. 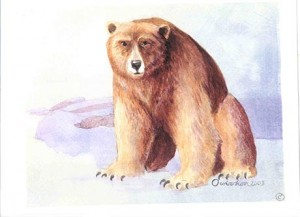 Brown bear sitting in the snow. 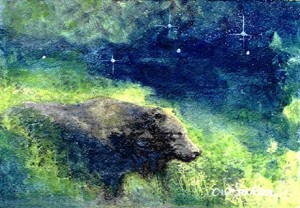 Black bear in the midst of high grasses under a starry sky. 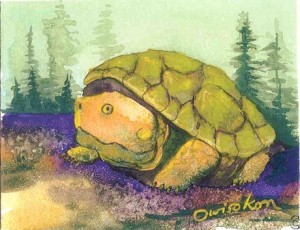 Serpentine turtle in front of a forest. 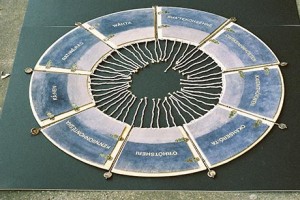 Ceremonies of the Iroquois

This artist book is a unique and moving piece based on the elements that are essential to Mohawk culture.

Bear, Wolf, Turtle, Eagle, Eel, Beaver, Deer and Heron are the major clan families of the Iroquois matrilineal nation. The Iroquois Confederation is made up of five separate nations: Mohawk, Oneida, Cayuga, Onondaga and Seneca.
The Circle Wampum is one of the most important Iroquois wampums, and is linked to the founding of the Great Peace. It has often been given the name Great Charter of the Confederation. Two interlinked rows of white wampum or white beads border fifty rows that point to the centre of the circle thereby formed. The longest of these rows of white beads represents the seventh chief of the Onondaga nation, whose role is to be the guardian of the wampum.
We join their holding each other firmly by the hand, forming a circle so solid that our people and our great-grandchildren will always remain within a circle of safety, peace and happiness.
There are nine major spiritual ceremonies. Each of us in turn gives thanks for what we receive and what helps us achieve a good life for our families and our children to come, in the greatest possible respect for the Creator. 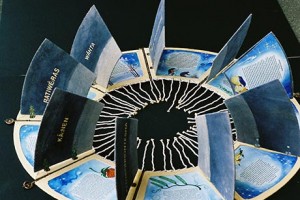 Ceremonies of the Iroquois