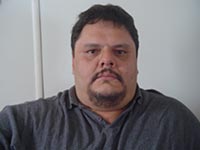 Peter Pelchat was born in 1968; his father is Québécois and his mother, Cree. He lives and works in Chisasibi, where he has taught since 2003. Pelchat has a Visual Arts degree from Concordia University. He is developing a remarkable synthesis of elements drawing on his art history studies as well as his knowledge of major contemporary arts currents, and those derived from the intimate relation he maintains with all aspect of his original culture.

Pelchat is very devoted to his people’s lands and their environmental preservation, and his work has deep roots as well. He does not fear expressing himself through this work, at times with humour, sometimes vehemently but never complacently, on land, social and cultural issues facing the Cree Nation. 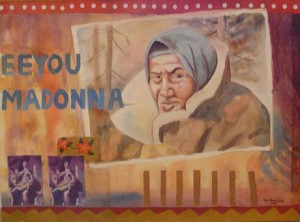 Children at her Feet

Portrait of my grand mother. I am comparing her to the women seen in old and famous paintings ‘madonna and child’ and ‘mother and child’ produced during the 1500s and 1600s mostly in Italy.

Children at her feet

“The title comes from a song of the beatles called “Lady Madonna” The portrait is my grand mother’s. Apparently she was very good for her children and her grand-children.Here i am comparing her to some of the famous paintings of “madonna and child” that were painted by the millions in the past by many famous artists. on the lower left corner there are 3 copies of “the madonna with the long neck” The reason why i picked this painting by Parmigianino is because the way the madonna looks in that painting is different from any other artists’ rendition of her. She is special just like my grand-mother. Below my grandmother there are 4 strips of real sandpaper that i had glued. they represent her character. According to my mother and everyone who knew her, my grandmother was a special woman indeed.“ 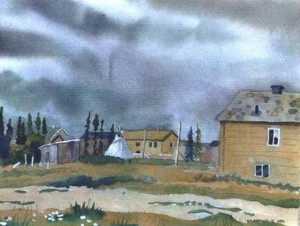 Chisasibi under a low sky

A typical scene of my hometown Chisasibi, Quebec. One tepee surrounded by houses under a cloudy sky.

Chisasibi under a low sky

“All the houses in Chisasibi are similar and therefore a challenge to paint a scene of the village. Here i simply wanted to capture the silence that i saw that morning when i saw that particular scene near my mother’s house. the dark sky acts as a “foreshadow” of something that is about to happen, but what? Judgement maybe…” 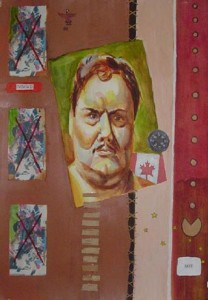 Selfportrait with small Canadian flag. A look at my own identity as a metis (French canadian/Cree native) I wanted to show where I am situated within these two races/culture. Sometimes I feel lost but I know for certain I am Canadian.

“This painting/collage is about my identity or the discovery of my identity.It took me many years to figure out who I am. Was I cree, white, or something in between. I found out that I was truly “metis” in my heart. This painting is a representation of who I am. The painting can be divided into 3 parts vertically: The left side shows that I am not a Native (represented by the 3 native dancers with an x painted over them) The word “Nimwii” (which means no ) written over a red rectangle states that I am not a native. The only thing that identifies me as a native is the depiction of a goose on the upper left corner with 3 vertical strips that stand for the number 3 shows the number of geese I have killed at the time the painting was done.

The middle part of the painting depicts me the way I see myself: The flag shows that I am certain that I am canadian. The “boussole” is a symbol of my interest for adventure and discovery.

The tree bark( which I glued) symbolises my strong roots (appreciation) to my culture and traditon.

The right side of the painting shows that I am not a white man: the word “not” written over a white boz means exactly that. The Pac-man eating the dots upward stands for what I feel about the white man: they consume or exploit whatever is on their path. The constellation of the big dipper drawn in reverse of the actual constellation is an example of my interest in the white man’s sciences. the reason I draw the big dipper in reverse is to tell the viewer that the sciences do not have all the answers in life.

The background: It shows the union of the native side of me(brownish colour) and the white man side of me (pinkish colour) They are held together by a thread that I have sewn into the paper. The black thin line in between these two colours symbolizes my past and the dark times when I felt lost with no sense of identity.” 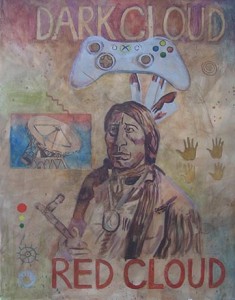 Peter Pelchat, 2006
Watercolour and acrylic on illustration board, 15 x 20″

This is about the sudden bombardment of technology on the crees during the 1970s and 80s. The construction of the Hydro Quebec dams brought a road that leads south. This brought to our people technology that we were not ready for. Because of technology, such as automobiles, snowmobiles, stereo sound systems, computers and other such things, we have lost our traditional ways of life. The video game controller over the head of the famous indian leader Red Cloud acts as a dark cloud placing him in the shadows of life. We are at the mercy of technology. The radio telescope depicted on our left is a symbol of the search of a new identity. 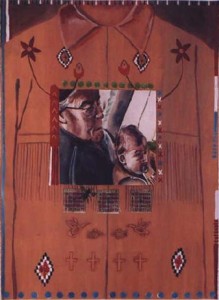 Part of a series of 8 works, it is a light-hearted view of the strong interest that the crees have for the game of bingo. The grand mother and grand child are symbols of the people playing bingo. In this work, bingo is more important than hunting/fishing and religion (or so it seems). Nevertheless they are protected (framed) by the chief’s coat meaning their tradition/culture is alive and well.

“This is about the unusual juxtaposition of love/protection and the game of bingo(which is THE game here in chisasibi). The depiction of love/protection that the woman gives to the child is framed by a chief’s coat (symbol of power and protection) this means that the crees and their culture and tradition are safe.The 3 bingo cards under the woman and child shows that bingo, which stands for material wants is not so important for the crees. the geese,fish and cross are symbols of their culture/tradition. All in all, sure the crees enjoy playing bingo, but their identity is never forgotten.” 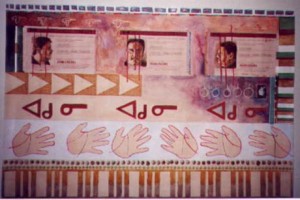 This is a self portrait of my struggling once again with my identity. The repetition of my native status card symbolizes who i am according to the government. Sometimes i feel that without my native status card, i wouldn’t have an identity. This card sets me and my people apart from the rest of the population of our country. I sometimes feels that this card only confirms that we a re different, reinforcing the image of the Hollywood Indian or the John Wayne Indian. The hands symbolize time and life. The vertical bars symbolize the feeling i have of being a prisoner within this identity and card.

“Here I am mad of how the government sees us natives. We are given Native status cards to inform everybody in the world that we are indeed natives. we are given a number and a picture beside it. I feel like a criminal when I look at my card. I feel like I am in prison (symbolized by the vertical stripes in the bottom of the painting and my fingerprints above it) my native status card sometimes reminds me of a mugshot. Why do we need a card to remind ourselves and others who we are? It seems that without it, I would cease to exist. the contour of my hands symbolise who I really am a person with heart and life (life line and heart line drawn in red).” 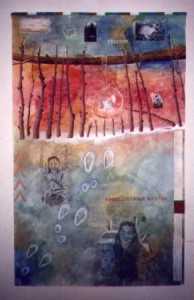 We are not hares

This one also deals with identity. As a cree today, it is hard to simply live a normal life because we are always seen as different and even ‘exotic’ to non-natives. And with the Oka crisis and other sad events we are sometimes seen as trouble makers and as a spoiled people. Sometimes I see us the crees as hares (rabbits) walking straight into snares (traps) that will strangles us to death. Hydro-Quebec constantly wants pieces of our land and wants to make golf courses with it as well. We are trapped as a people because we are never left alone in peace.

We are not hares

“This is a message for our people warning them not to be fooled by what the white man is constantly offering us for a piece of our treasured land. the land that we depend on in order to survive as we are at the moment: strong, proud, and free using the land solely to survive and not destroying it. Unfortunately we given up some of our land in order to receive much needed money. The rabbit snare represents the offers that the quebec government and others are offering us for land, and sadly, just like hares we walk into the trap and pay the price.(loss of land, drugs and alcohol abuse, etc.) The painting shows that the wooden barrier can be overcome if we simply follow another direction meaning that there are other ways for us to survive besides giving up more precious land for money.” 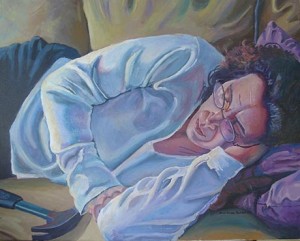 This deals with women issues such as feminism, struggles, power, fertility or the loss of fertility. The interpretations of this works are numerous. It all depends how one connects the idea of sleep and the hammer close to the woman as she rests. 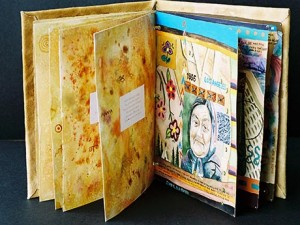 This picture comes from an artist’s book I made in 2005. It dealt with the people that have influenced me as an artist. It is an homage to these people, seven of them who are special to me. 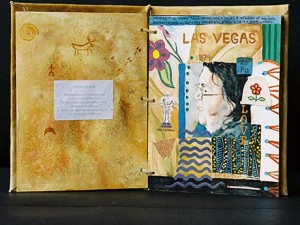 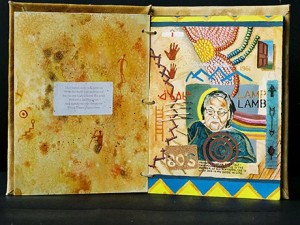