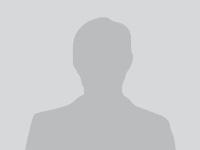 He is in charge of a training program for artists in digital creation for the Premier Jet collective project at Atelier Presse Papier.
In summer 2004, he was artist in residence at Musée des Abénakis and developed a stained-glass project, as well as a project of an archeological nature. Moreover, he takes part in the Atelier Presse-Papier’s ABC, a book project, planned to come out at the end of 2005.

An approach full of subtlety, combining a desire for solitude and an urgent quest for identity has lead the artist to strengthen his sense of belonging to his culture of origin. As he gets more and more involved in his community and develops a higher profile there, he has won the trust of his people. This is the context in which he can define the specific contribution of a contemporary creator, whose experiences and influences come from outside his community. Working in visual arts, principally in the engraving/printmaking field, whose poetic charge never stops making us discover our own dark sides and the damaged child in all of us, thorugh a strange and murky atmosphere. 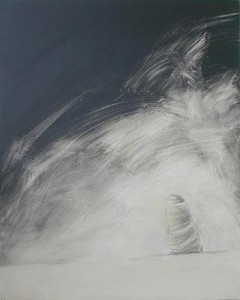 Être et ombre (Being and shadow)

Grey, black and white tones. Depiction of a sort of cocoon amidst misty clouds. 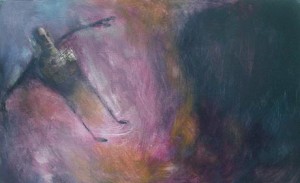 Violet, orange and blue tones. A man with outstretched arms seems to levitate in a ray of light. 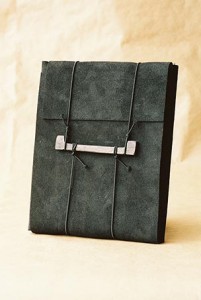 Book cover. Black leather surrounded by cords held together by a piece of wood.

“This project enabled me to look closely at my aboriginal identity. With an Abenaki father and a Québécoise mother, I’m a member of the half-race of humans among whom uncertainty is a type of ghost looming above our beings. My skin bears traces of my father and my mother. I have two races, two cultures, and two ways of seeing in my genes. I am slowly harnessing the Abenaki in me —I am very familiar with the Québécois part! I’m also European, American, English Canadian, a fortunate chaos. Enriched by these influences, I study my body and the genealogy in order to find some clues…

The crowd, the faces, all anonymous, all alike, but different, unlike… Aligned as in a DNA chain, separated, cellular, inscribed within me, invisible. They follow me despite myself; keep me assembled, in a single piece held together by my skin. What do you say I am? My skin is white…”

Photograph of the artist as a child. Drawings depicting only tiny faces in black and white.

Abstract figure standing in the middle of a nebulous formation. Black and white shades.

Figure in profile with a bubble like cartoon speech bubbles, in which graphic symbols appear. Black and white shades.