Le dernier discours d’Adario (Adario’s last speech) portrays the last words of the great Kondiaronk, known as The Rat, and named Adario in Lahontan’s Dialogues. Theatrically stretched out on his corn-kernel bed, the character, surrounded by masks, makes a speech tinged with wisdom and peace despite his suspicions of the real motivations of the French. Although Adario is represented alone, the work focuses on the very heart of the encounter. The purple and white colours of the work recall those of the peace wampum, symbolizing two main roads, two nations living side-by-side and respecting each other’s values. 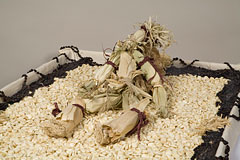