“In his account, Mathieu André gives equal attention to Innus’ ancestral beliefs and sacred rituals and the “new religion” brought by the Catholic missionaries. He even seems to contradict himself, since the Church condemned traditional rituals, seeing them as satanic. Nowadays, some Innu converts do indeed think that there was something pernicious about the rituals of old. We wanted to express this opposition of beliefs and practices while showing that it could have been possible for the two belief systems to exchange with each other without self-destruction.”
ASHUKAN

Jean-Pierre Fontaine and Isabelle Courtois have imagined a clash between spiritualities that still leaves a deep rift in the hearts of many people nowadays. Mathieu André’s inside knowledge of Innu sacred ceremonies enabled him to convey in written form a legacy passed down via oral tradition, and threatened with disappearance after the missionaries arrived. The Ashukan bas-relief, with its fractured aspect, is a clear expression of this heart-wrenching rift. Can the two halves of a broken circle become whole again someday?

The left side of the work shows some aspects of traditional Innu ceremonies, such as a sweatlodge. Here the figures depicted are in a contemplative mood. By a fire, a shaman interprets the signs the fire has left on a caribou shoulder blade. The patinated plaster provides a bronze effect: greenish tones embellished with golden highlights. The set of sculpted pieces lies on two dyed skins with roughly ripped edges. The way these two elements play off each other gives rise to a palpable tension between two separate universes which each have their own codes and features. The contrast between these two worlds is heightened by the attitude of the figures depicted: the enraged priest and the contemplative shaman.s 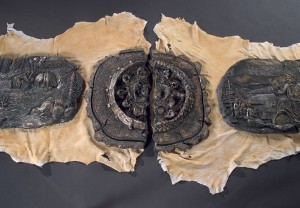 The title does not appear on the bound cover decorated with a drawing on white glossy paper. The drawing in black depicts a human head in profile made up of elements drawn from nature that have a vital significance among the Innu. The neck is a tree trunk, the mouth has the shape of a salmon, the eye the outlines of a harpoon, the eyebrows resemble an otter and the hair is a beaver whose tail becomes an ear. On the cheek of this emblematic head, we find the stylised head of a caribou.