“Jacques Cartier’s“chat sauvaige” would have been the red lynx.“Dyn”, the fallow deer,“Serf”, the wapiti or Canadian elk. Nowadays, the wapiti has completely disappeared from our regions.” On May 10th 1534, Jacques Cartier landed on Newfoundland. From then on he was much more interested in the fauna than in the Aboriginal inhabitants.”
GEORGETTE OBOMSAWIN

If Jacques Cartier seemed to see the animals he encountered during his travels as“savage beasts”, Georgette Obomsawin adopts ornithologist’s approach when she takes an inventory of Cartier’s birds. Everything seems to be going well in this avian world, pretty as the proverbial picture. Then we see two little tombstones, beside the passenger pigeon and the great penguin, lending a sombre note to this idyllic picture. Obomsawin’s other work, titled La nature vivante javéllisée, plunges us into a hallucinatory universe in which, by a strange turn, a normal house cat becomes a beste sauvage in turn.

On a long band of black cotton, fluorescent felt pens furiously sketch animals caught in the act of transformation. Flashes of pink, blue and apple green, cats and birds with their claws and talons extended in a pulsating vortex. The canvas is studded with the zebra crossings of ephemeral lightning bolts.

This first detail of the work shows a long, stretched wire made of glass beads, on a white background studded with blue spots. Six birds are perched on this wire. Among them we recognise the robin, the cardinal, the bluejay and the mourning dove. On the ground beneath, among a bouquet of grasses or rushes, a plover opens its beak. A blue crescent moon at the upper right and an orangey sun just above the plover enliven this unusual arrangement.

Ink, graphite and coloured pencils on paper, taken from a book of sketches, 35 x 27.5 cm

Ruffed grouse, ink on paper. Drawn in shades of blue, with its crest deployed, its round, nervous eye does not sense any danger for the moment. 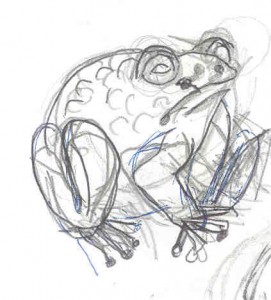 A burgundy cover with a striking white title; the author’s names at the top. Three illustrations taken from the body of the work enliven this generally understated presentation. At the upper right, a tree-trunk man, half-man, half-tree whose waist and head are ringed with leaves. On the left, a woman covered with an animal skin and towards the right, at the centre, a chimera, with a lion’s body and a man’s head. These illustrations are in black on a cream-coloured background. 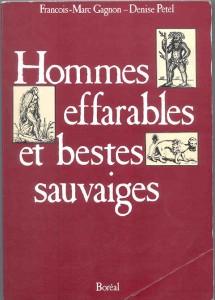