Emergency, emergency, the skulls seem to scream out, the dikes have closed, a nightmare below the dams, villages are submerged, territories wiped from the map, despairing humanity turns the TV on to view the endgame. Glenna Matoush hasn’t read up on the “Peace of the Brave”, she travelled there and one fine morning a great river flowed in her Montreal studio.

Here Matoush’s highly shamanic art, with such an attention to the suffering of souls, confronts the devastation of the land. Instead of a book, Matoush gave us a river to read. Bonne Nuit Eastman River is a hard-hitting work, a blow against ruthless development.

And yet, despite the bones and her harsh treatment, this is not a work of despair. The great beaded river crossing the surface of the canvas reminds us that it carries life from one end of the territory to the other. Between a cry and an invocation, a voice is raised against the silence of devastation. 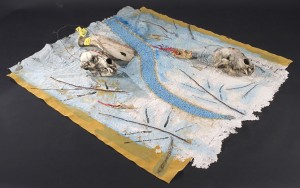