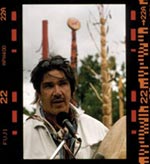 Jacques Néwashish is a painter and printmaker who also manages a traditional life site at Coucoucahe in the Upper St. Maurice Valley. Intelligence attentive to beings and the land permeates his work. Through his art and his involvement in his people’s cause, this sensitive and committed creator has remained a man with the freedom to accord his breathing to that of the earth.

During his installation-performance titled Circle of Life, Jacques Néwashish plotted out a vast trail, leading those who follow to experience an intervention in a specific landscape. A Wémotacie team has cut and prepared a thousand poles or sticks, two metres high, under the artist’s guidance, to mark a trail of friendship. These poles bear signs, marks and traces of the region where they were gathered and of the people who worked them. This first stage in the project involves Wémotacie Atikamekw community participation, particularly youth, providing them an opportunity to show their pride in belonging to their community while extending a gesture of friendship to city dwellers.

Afterwards, the poles of friendship will journey to Montreal, where there will be installed according to the site chosen. Specific rituals and performances (chants and dances) will accompany the stages in the performance.

Finally, the poles of friendship will be set up on the site surrounding Kondiaronk Belvedere in the form of a trail. The Atikamekw Nation’s territorial forest will thereby take root in the cityscape. A symbolic exchange between two types of land occupation will be elaborated around the artwork. 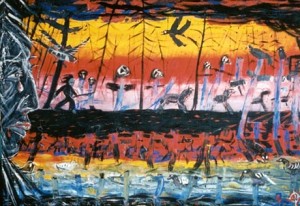 Red, black and blue tones. A river flows through a forest. A large profile of a human head with a sad expression fills all the left side of the painting. Stylised birds glide above what seems to be crosses in a cemetery. A small man holding a walking stick walks on the tracks of four-legged animals. 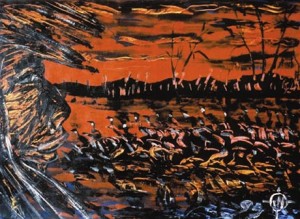 Orange and black tones. The profile of a human head with a thoughtful expression fills all the left side of the painting. A flock of geese is resting on what appears to be a lake. In the distance, we can glimpse small round mountains. 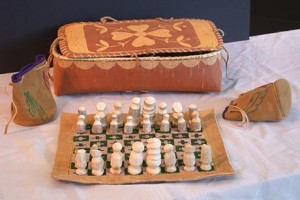 The board is made of leather. Its squares are made of glass beads. The birch-bark basket is decorated with a carved flower with four petals from which stems and small leaves emerge. The small leather bags are embroidered with threads making up feather motifs.

“A long time ago, all beings were spirits. The Earth already existed and was like a paradise. There were meadows, forests, lakes and rivers, as well as mountains that touched the sky. But no man and no animal lived there. The spirit who had created Earth wanted to protect it. He invented a game in which the clans faced off to determine which one would be Guardian of the Earth.”

In some Aboriginal cultures, the sky, or more precisely the Milky Way, is depicted by a checkerboard with a cross in each box. These crosses mean stars. Jacques Néwashish’s chessboard is made of beads embroidered on an elk skin by a woman from his community. The game is played on this starry sky. The stylized pieces carved from elk antlers evoke some of the animals that shared the great forests with the Atikamekw.
This board can be rolled up, with its pieces safe in their embroidered sack. The set fits into a bark basket decorated with floral motifs typical of Algonquian peoples. It can be easily carried in a canoe, along with the everyday objects the Atikamekw, traditionally a nomadic people, used during their seasonal moves. 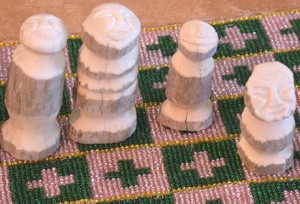 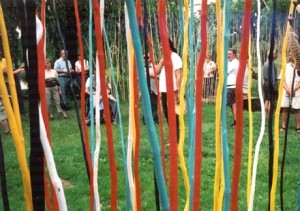 This performance took place on June 21st, National Aboriginal Day, at the First Nations Garden. Jacques Néwashish organised a greenspace by planting hundreds of wooden poles whose dimensions were approximately ten feet tall by one or two inches in circumference. These were painted in the colours of the four directions; yellow, red, black and white. In the photo, we see Jacques speaking to the participants. 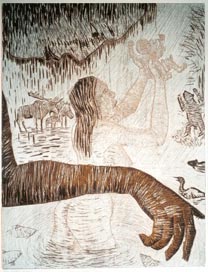 L’Enfant lumière (The child of light)

A nude woman lifts her newborn child towards the light. A family of moose, a standing bear, fishes and birds are with her in a small brook in front of the mountains. A protective arm covers the central and horizontal central of the picture.