Viewed side-by-side, Pauline Lahache’s two works are perplexing, seeming to hail from opposite universes. And yet, the magnificent ceremonial headdress and the eagle on its tree in Prophesy are products of Iroquois spirituality, an endless source of inspiration for this artist. The ceremonial headdress belongs to a chief and is worn during the condolence ceremony that takes place in the longhouse. With the tree of peace and the longhouse, we are in the heart of Mohawk spirituality. Pauline Lahache wanted to emphasise its importance in these works, by using some of the codes of Christian iconography in Prophesy, and by persisting in the creation of an object of a sacred nature, as an expression of faith.

With Prophesy, the artist is taking up an essential theme of Mohawk spirituality. The great tree of peace still remains a powerful unifying symbol, and for many, through the knowledge of its meanings, the path of peace, which is the Law for the Iroquois. The figure of the eagle at the summit of the tree reminds us that there can be no peace without vigilance. Prophesy is a paradoxical work in that its gold leaf is typical of a certain type of Catholic statuary. Whether or not the artist is being ironic here remains an open question.

The ceremonial headdress completing Pauline Lahache’s contribution is also an object of a sacred nature. Its workmanship, from the choice of materials to the meticulous arrangement of its motifs, is a kind of prayer in itself.

The headdress is positioned on its carrying case, a trunk made of wood and woven rattan, with a brass clasp and handles. The pale tones of the wood and rattan harmonise with the headdress’s colours. The wild bird feathers are left in their natural state. The headdress has delicate nuances of beige, black, brown and grey. Three eagle feathers, set in the centre of the headdress, stand out from the silky mass of different types of feathers. The bleached deer antlers come from a young beast. 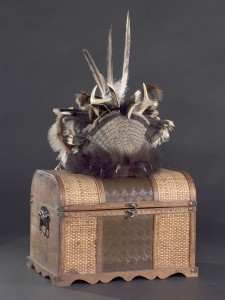 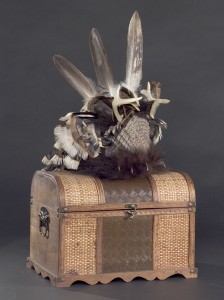 This sculpture, entirely covered with gold leaf, represents a being, half man, half bird, perched on a branch symbolising the summit of the great tree of peace. This being is the spirit protecting peace. He has the body and legs of a man, his head and widespread wings are an eagle’s. 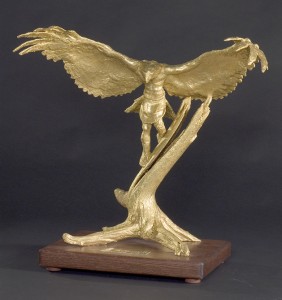 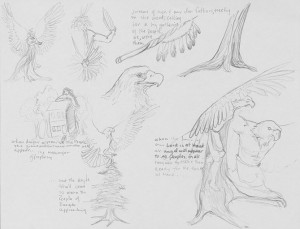 A gilded religious image of the saint set in the midst of a pastoral landscape. 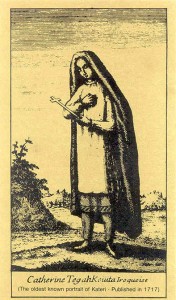 The Tree of Peace

Illustration taken from the book The White Roots of Peace by Paul A. W. Wallace, University of Pennsylvania Press, 1946

Once again, at the top of a tall pine tree, the eagle with its wings spread. A rather intriguing detail is added in this version: a tomahawk is buried at the foot of the tree among its roots that extend over all the ground. The war hatchet has been buried once and for all. 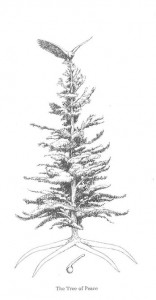