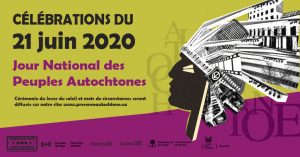 Land In Sights, in accordance with established tradition, will organize a fire ceremony on the island of Montreal on June 21st, at sunrise; on this solstice day, a Mohawk Elder will preside over the ceremonial which, pandemic requires, will be webcast via www.presenceautochtone.ca

starting at 5 am. Montrealers are invited, at that time, to open their computer and their window and to burn some tobacco in order to participate in this propitiatory rite which is intended to herald better times.

Artists and personalities from the Aboriginal community will also have recorded messages of hope and healing addressed to Montreal and the country, especially to mark this National Indigenous Peoples Day 2020. These wishes coming from the community will be available online following the streaming of the ceremony.

In addition, MAtv will broadcast from 8 p.m.  to midnight, the programs shot during the 2019 Montreal First Peoples Festival; an opportunity to immerse in the festive excitement which, hopefully, will return to ignite Montreal in the summer of 2021.

The personalities who will deliver a message on www.presenceautochtone.ca :

Note: Land In Sights was the first Aboriginal organization in the country, in 1995, to celebrate the National Day of Indigenous Peoples in a Metropolitan Area.