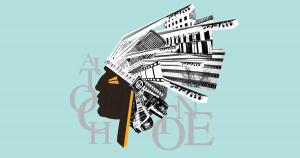 More than ever, for its 29th edition, the festival makes the heart of Montreal beat in tune with the spirit of first peoples of the Americas and the world. Major concerts on the Place des Festivals, international film and video competition, major events in visual and media arts, gastronomy, colloquium, meetings and poetry (August 6 to 14).

A thousand fires light up and make Montreal shine in the colors of its oldest origins and announce a warm period of friendship, dialogue, creation and reconciliation. To whom the future?

Quebecers finally had an authentic glimpse of the cultural and artistic richness of the First Peoples’ programming, thanks to the wonderful series dedicated to the festival by MAtv, which was a great audience success in 2019.

So, Wednesday, August 7: Haka workshop (N.B. for women only) and the formation of an ephemeral choir for the play Grands espaces. Followed by performance on stage and by Murray Porter blues session.

Then, Thursday, August 8: two major consecutive concerts. The first one, Katajjaq and Khoomii, chorus Nunavik/Mongolia, with the guttural harmonies of Lydia Etok, Nina Segalowitz and Tamir Hargana, the musicians of Oktoécho (Montreal) and Orchid Ensemble (Vancouver), a co-production of the SMCQ. The second one, Mama Mihirangi and the Mareikura, embodies all the power of the Maori tradition, concentrated in an exhilarating spectacle.

On Saturday, August 10, at the arrival of the Nuestroamericana Friendship Parade, whose departure will be given at the Place Jacques-Cartier, to conclude, after passing by Notre-Dame and Saint-Laurent streets, on the Place des Festivals, will be held the great choreographic show where Montreal’s cultural diversity will pay tribute to the city and the First Nations: 1,500 costumed dancers and troops representing traditions from 33 countries will make the parade and show presented on the First Peoples Québecor stage a great event of solidarity and reconciliation. Saturday, August 10, starting at 5:30 p.m.

On Sunday, August 11, at 9:30 p.m., Leela Gilday makes her entrance on stage and her rich voice dances to the rhythmic rhythms of traditional Dene drums, bewitching like the soft whisper of the wind.

As well, on the Québecor stage:

Also, at the Cinquième salle of the Place des Arts, on Friday, August 9: Makusham! With Florent Vollant and the OSM, presented by the Virée classique, at 6:45 pm.

Indigenous filmmakers have gained international renown, a recognition to which the pioneering work of Présence autochtone is no stranger: an asserted dynamism whose 2019 programming will be both the witness and the leaven (Cinema du Parc).

In world premiere and opening the festival, NIN E TEPUEIAN (My scream) by Santiago Bertolino, a local production where Santiago Bertolino’s camera follows a young Innu poet over a period of one year. Her speech is assertive and rising, inspiration strenghtens, one more star finds its place in the constellation of contemporary Aboriginal literature. A first magnitude voice that illuminates a path of rebirth and healing: Natasha Kanapé-Fontaine.

Another writer’s portrait: N. Scott Momaday: Words from a Bear by Jeffrey Palmer is dedicated to the writer Kiowa Navarro Scott Momaday, one of the greatest names in contemporary literature (Pulitzer Prize winner for his novel House Made of Dawn). The documentary situates his writing in the continuation of the ancestral territory, a scene of light and tragedy, where human experience naturally takes on an epic height.

A feature film, Sami Blood, portrays an elderly woman returns to the North and flashes back to her youth: reindeer herds in the taiga, the residential school where she was placed with her sister, the desire to learn and progress disrupted by the prevailing racism and heavy family tradition.

The Dead and the others, a fiction co-produced by Brazil and Portugal, tells the story of the young Ihjãc, inhabited by the gift of communicating with the dead and who fears the shamanic powers that awakens in him.

From Russia, Kniga Morya de Aleksei Vakhrushev takes us to the Arctic Sea to hunt marine mammals. Chukchi myths and legends from the depths of time, told by the elders, inhabit the imagination of a hyperboreal country and give meaning and direction to the lives of the intrepid hunters.

Lapü, by César Alejandro Jaimes and Juan Pablo Polanco, depicts a Wayuu belief: between dream and documentary, a women exhumes the remains of a relative so that harmony may return and blurs the border between the dead and the living.

One Thousand Ropes, by Tusi Tamasese: Maea, a former Samoan wrestler who has become a midwife is haunted by the spirit of a dead women even though he shall take care of his daughter and the unborn child.

Untɨ, les origines, by Christophe Yanuwana Pierre: beginning on the shores of the Carribean Sea and leads the Kali’na director to the mythical heights of the Tumuc Humac Mountains. An initiatory crossing of the ancestral territory with the reassuring presence of the ancient spirits and the shadows of the ecological disaster that threatens the upper Maroni River.

Thinking like a Mountain, by Alexander Hick, shot In the slopes of the Sierra Nevada de Santa Marta, where the Arhuacos maintain a way of life threatened by armed conflict, mining, and climate change.

Huahua, by Jose Espinosa : self-fiction with a young Aboriginal couple who question and quarrel about the identity legacy they will leave to the unborn child.

Biidaaban (The Dawn Comes), by Amanda Strong, transforms the perception of space and time as only dreams can do, this stop-motion film takes us in the parallel universe of a young Anishinabe who harvest maple sap at night in town.

Our Maori friends, accustomed to the First Peoples Festival, are returning this year with short films subtitled in French especially for the presentation of films in Montreal.

Today, we are announcing the creation of another film award, in addition to the Teueikan Awards, Rigoberta Menchu, APTN, Séquences magazine, Mainfilm: the Best Canadian Short Film, with a thousand dollars grant.

The winners will be announced on Sunday, August 11.

Two-Spirit among Aboriginal Peoples, August 5 to 21

In 2019, we must recognize the exceptional contribution of the Centre international d’art contemporain de Montréal, which organizes, with one foot in First Peoples Festival and the other in the Pride Festival, the first major solo exhibition by Blackfoot artist Adrian Stimson to be held in the city of Montreal, at the Galerie de l’UQAM, as part of an event under the theme of Two-Spirit. In parallel, an exhibition of the works of Ma-Nee Chacaby, author of Un parcours bispirituel. Récit d’une aînée ojibwé-crie lesbienne. With lectures, meetings and a performance. www.ciac.ca

In 2019 again, the First Peoples Festival and la Guilde partnership offers a major summer exhibit: Nehirowwisidigital from Meky Ottawa, an Atikamekw from Manawan. A self-taught multidisciplinary artist based in Tio’Tia:ke (Montreal) who uses video, illustration and installation as mediums.

Essence et apparat at the Ashukan Cultural Space, from August 6 to September 30

An incursion into First Nations clothing art. A demystification and transformation of the traditional feather headdress of the Western Nations. A historical, traditional as well as contemporary presentation. With Sylvain Rivard, Catherine Boivin, Tahatie Montour, Angel Horn and William Burnstick.

Rebecca Belmore at the Musée d’art contemporain, Wearing our Identity (permanent collection), There’s a reason for our connection and Haida at the McCord Museum until October 27.

The return of the giant tepee to the Place des Festivals, with demonstrations of traditional know-how, drum and dance, Naskapi space and screenings in the Maison longue MAtv, from August 7 to 11.

The Indigenous Insights on the Americas symposium, with the Year of Indigenous Languages featured and the screening of the Mohawk version of Kanehsatake, 270 ans de résistance at INIS and Kahnawake, August 12-13.